Some pest control specialists moved into my garden lately and they’ve been very very busy!

Common Australian Lady Beetles.  They weren’t busy when I went to get the camera but… nature does what nature does.

Other than busying themselves with the above activity[1], they’ve really been busy with eating!  I’ve been noticing a significant decrease in the aphid populations in the New Castle gardens.

Australia has a number of species of ladybirds that actually farm aphids instead of eating them, so to make sure that I had the right species, I turned to an online ladybug identification website and it told me that I had a mix of Asian Harlequin Lady Beetles and Common Australian Lady Beetles.

As a general rule, Ladybirds tend to be polite little garden denizens.  They clean up aphids in the hundreds and generally keep out of your way.  In fact, they’re extremely good at migrating away from the rabbit’s breakfast wheat once it’s harvested.  I only have to shake the wheat once and they just fly away.

It’s been really hot and dry out here in New Castle, so I have been hose watering the garden once every two days.

I was out watering the garden one morning, when I felt a really sharp pain in my leg on the inside of my boot.  It was excruciating!  I immediately dropped the hose and started clawing at my boot to get it off.

It was sheer panic.

“Oh no!”  I thought, “I live in Australia.  It’s probably some nasty spider and I’m gonna die a horrible horrible death.”

Imagine my surprise when I looked down to see a titchy little ladybird chewing away at my shin.  It flew away once I started picking at it and made off with a small chunk of my flesh.

The hole in my shin several days after the fact.  It’s a pretty big hole for such a tiny bug!

It turns out that Asian Harlequin Ladybirds are notorious for turning to human resources when conditions are bad and they’re desperate for food or water.  Their mandibles have a lot of difficulty piercing human skin, so they tend to bite very very hard when given the chance.  The little thing was probably dying of thirst when it decided to hitch a ride in my boot.

Poor fella.  I couldn’t stay mad at him for long.

After all, he was just so cute.

PS.  Check out this comic from Scandinavia and the World on the many names of the Ladybird!

While my potato harvest has been extremely good, we are getting a little sick of potatoes here at The New Castle of Corke.  I have been seriously running out of things to do with potatoes!  I’ve made nikujaga, mashed potatoes, irish stew and have even fried the darn things in my airfryer[1]! 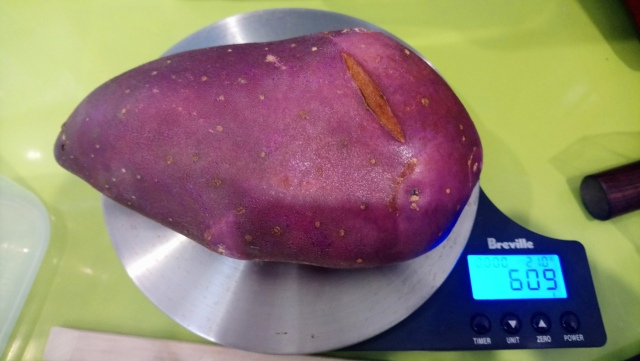 Check it out.  More than half a kilo of potato right there.

Yesterday, I dug up the biggest potato I had ever seen in my life and realised that I had gotten to the end of my potato threshold.  Neither the Boobook nor I felt like eating potatoes anymore.

Thankfully, my friend, Mrs Peacock, was visiting family in Newcastle and she had had far too much citrus.  So, we did the only thing that made sense:

Have a bag of taters

Oranges, lemons and tangerines oh my!

I have now participated in the barter economy!  Check me out being all productive and stuff!

[1]With little success, unfortunately.  Some potatoes were not made to fry.  They disintegrated instead.